The Hart girls tennis team won the Foothill League championship and ran its undefeated record to 16-0.

The Indians beat Valencia, 10-8, with all three singles players sweeping their sets.

Hart is ranked No. 4 in the CIF Southern Section Division 2 poll and has a 9-0 record in the Foothill League.

In high school golf, the West Ranch girls won the fifth Foothill League match of the season by 11 strokes over Golden Valley at the TPC at Valencia.

In college soccer, The Master’s College women lost to Westmont, 3-2 in overtime, in a match-up of top 25 teams in the NAIA.

The Master’s College, ranked No. 15 in the NAIA, took a 1-0 lead in the first half on a goal by Natasha Coyle.

The Master’s College went up 2-1 in the second half, but Westmont scored a goal in the 75th minute to send the game into overtime.

Westmont, ranked No. 3 in the NAIA, won the game with a goal in the 94th minute.

In cross country, The Master’s College women are ranked No. 7 in the recently released NAIA poll.

The Master’s College men’s team is ranked No. 17.

Both men and women’s cross country teams are entered in the West Coast Jamboree meet at Biola University in Orange on Saturday.

In baseball, the Boston Red Sox won Game 1 of the World Series, 8-1, over the St. Louis Cardinals. David Ortiz was 2-for-3 and hit a two-run home run in the seventh inning.

In hockey, the Kings are home for a game against the Phoenix Coyotes. The Kings are coming off a 3-2 loss to the Calgary Flames on Tuesday. 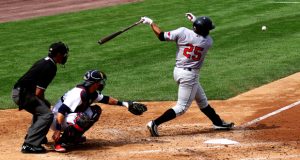