The College of the Canyons women’s volleyball team lost to El Camino College, 3-1.

The Lady Cougars won the first game, then lost the next three.

In high school golf, the Golden Valley girls beat Valencia by 31 strokes, 204-235, in a match at Vista Valencia. Golden Valley’s Elisa Pierre shot the low round of the match, a 2-under 31.

West Ranch’s Ashley Mayhall shot the low round, a 3-over 34.

In high school tennis, the Saugus girls blanked Alemany, 18-0, and won its fourth match in a row. The Lady Vikings are undefeated at 4-0.

Valencia, the No. 2 team in the CIF Southern Section Northern Division, plays Chaminade in a game at Valencia High School.

West Ranch, the No. 7 team in the Northern Division, is on the road and plays Knight in Palmdale.

Golden Valley travels to the Antelope Valley to play Highland.

In baseball, the Dodgers lost to the Arizona Diamondbacks, 4-1.

Yasiel Puig hits his 16th home run of the season for the Dodgers only run.

The Dodgers start a four-game series against the San Francisco Giants at the Ravine tonight. 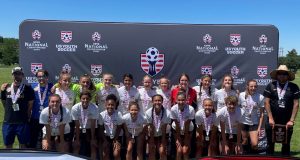